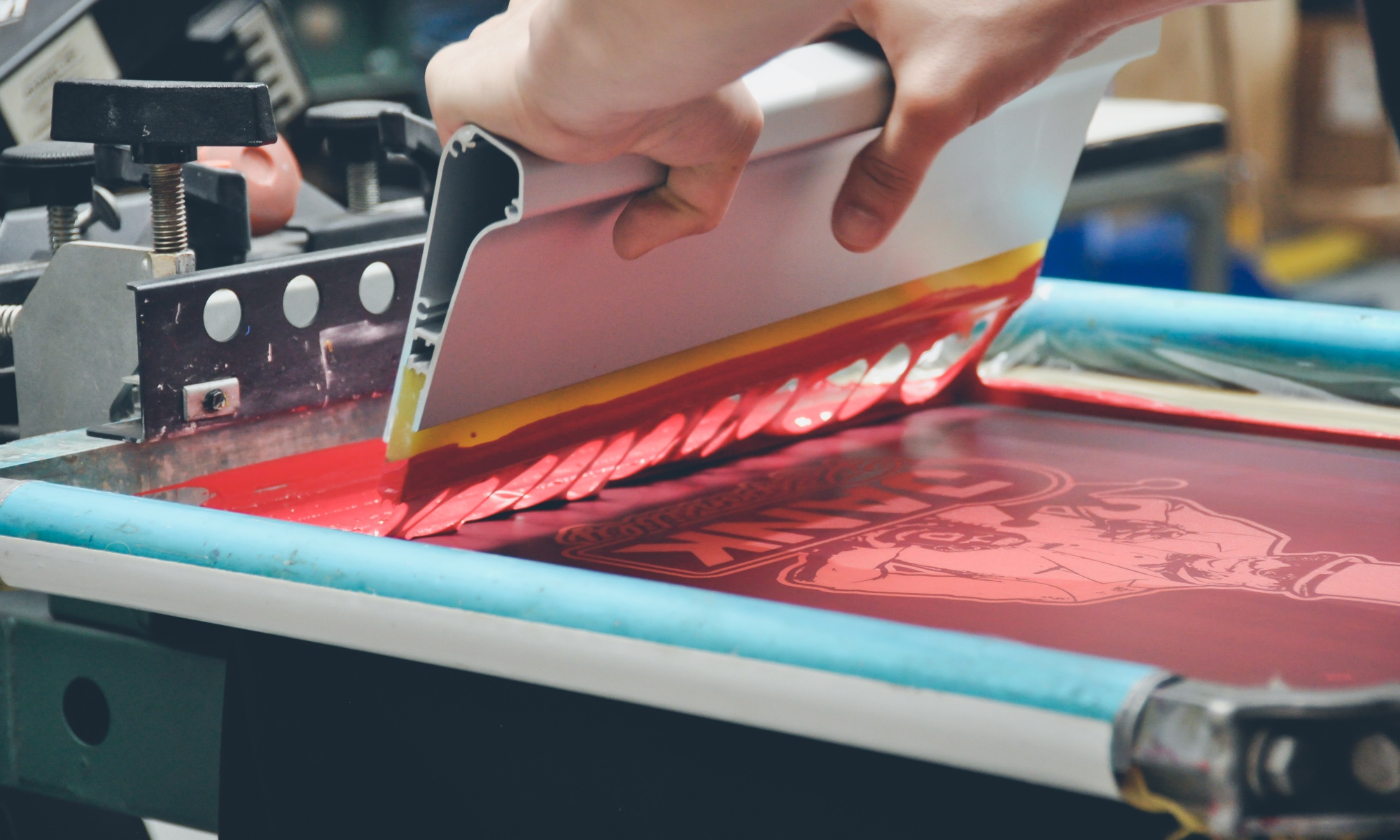 Screen Printing has existed in some form or fashion since the 10th Century, when it first appeared in the Song Dynasty in China.  Andy Warhol is largely credited with popularizing artistic screen printing in the 1960s, printing his art (like the Marilyn Diptych) through screens onto canvas.

The screen printing process begins with the artwork.  The artwork should be in vector format to be screen printed.  While bitmap artwork can be used to screen-print, vector is a much easier format for screen printers to handle.  Vector artwork scales better than bitmap and prints better because it groups and constrains colors. Since bitmap images are composed of thousands of tiny pixeles the color is less consistent.  Once you have suitable vector artwork, the colors in the artwork must be separated. This is because screen printing is “spot color,” which means that each color must be printed separately rather than blended.  Once the artwork is color separated, each color must be printed onto its own transparent film positive.

The screens are loaded onto a screen printing machine (typically a carousel) where they will be used one-by-one to print each color on the desired garment.  The screen printer will then place the correct ink color on each screen and lower the screen onto the garment. Ink is printed by pulling a squeegee along the length of the screen, forcing the ink through the mesh and onto the garment. Depending on several factors, including the type of ink, the garment might need to be “flash dried” between each color so that the next layer of color is not laid over top of wet ink that could cling to the screen and ruin subsequent prints. Screen printing is similar to painting a wall in that, unless you are using very opaque ink, a white underbase may be necessary to make the colors pop.

Once all the colors have been laid, the garment is removed from the screen printing machine and placed onto a conveyor dryer.  The conveyor dryer will carry the garment through an oven that will cure the ink to it. Curing solidifies the ink and is directly responsible for the print’s durability.  If the ink is not cured properly, then the print can crack or peel after being washed.

In addition to printing directly onto garments, screen printers can also print onto special transfer release paper.  The ink is not cured onto the paper, rather it is gelled. This allows for the paper to be applied to a garment at a later time and cured with a heat press.  This process can be advantageous for both the screen printer and the client because it allows them to print garments on-demand, instead of holding inventory of printed garments that may or may not sell.  In addition to that fact, screen print transfers do not require an underbase. Screen print transfers are also advantageous because they allow for multiple images of the same color scheme to be “ganged,” or printed onto the same sheet to save time and money. For instance, if a screen printer needs a left chest print and sleeve print, then they can be printed onto the same sheet with a single screen and then cut apart later.  This requires only 2 screens to be prepared rather than 4, and makes more economical use of transfer paper by using up more of each sheet.

Screen printing is the least expensive method of apparel decoration, while also providing one of the most vibrant and opaque prints of any printing process.  Most of the print costs are derived from the setup process, rather than the printing itself. It is also the most durable printing method, however screen printing is not without its drawbacks.  The aforementioned artwork requirements can be an impediment to completing a print job. It can also be very expensive to create full color prints or even prints with over four colors. The biggest issue with screen printing is that it requires a minimum of 12 pieces for an order.  It is simply just not economical to go to all the effort of creating screens and printing in order to make a single garment.

Screen printing is a game of variables.  It is an intricate process that requires effort and attention to detail to master.  When you consider the artwork, the screens, the emulsion, the types of ink, screen alignment, the curing process, and operation of all the involved equipment, there is ample opportunity for mistakes to happen.  It will take a lot of trial and error for beginning screen printers to familiarize themselves with the process and perfect their technique. That effort will be worth it, however, as the printing volume capabilities of screen printing are unmatched among other decoration methods.

As previously stated, screen printing is the most common form of apparel decoration.  Schools, businesses, and organizations are common customers for screen printers since they typically will order large numbers of the same prints.  If you are looking for a large run of prints with 3 colors or fewer, then screen printing is your best option. However, before you go off to purchase screen printing equipment, you might want to considering outsourcing screen print transfers and applying them using a heat press.